The Tools to Succeed.

Two recent graduates of the International Test Pilots School in London, Canada share their customized experience and successful training outcomes, despite the challenges presented by Covid-19.

Enrico Lo Greco and Pierfilippo Rizzo received a warm welcome when they arrived at the International Test Pilots School (ITPS) in the middle of a cold Canadian winter.

Lo Greco, a test pilot, and Rizzo, a flight test engineer, are employed in the Electronics Division of international aerospace, defence and security company Leonardo S.p.A. Together, they are working on the flight test program for the OEM’s Falco Xplorer Remotely Piloted Aircraft System (RPAS).

The largest RPAS under development at Leonardo, the Falco Xplorer is based on the proven Falco family, a family of unmanned aerial vehicle systems widely used in intelligence, surveillance and reconnaissance roles.

A multi-sensor, all-weather craft capable of providing 24/7 regional surveillance over land and water, the Xplorer is classed as a light medium altitude long endurance (light MALE) remotely piloted system. It logged its first flight in January 2020 and is now undergoing military type certification.

Recent regulatory changes meant that Lo Greco and Rizzo were required to have additional flight test training in order to complete the evaluation of Leonardo’s new RPAS system. The search began to find a school that was flexible enough to offer the necessary training within the timeframe specified by the OEM and the regulator.

It didn’t take long before the test pilot and flight test engineer landed at ITPS in London, Canada. 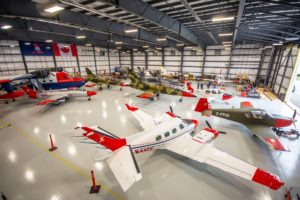 “The school was already known by Leonardo’s helicopter division, and we had received excellent reports about its programs,” said Lo Greco. “It has an outstanding facility and impressive fleet of aircraft, including a magnificent Grumman HU-16C Albatross, L-39 Albatros, L-29 Delfin, B60 Duke, and Bo 105… all of them in a perfect state of airworthiness and maintained by a large team of technicians.”

He added: “But the most important thing, in my opinion, is that ITPS was able to schedule a dedicated course for us. The course started in January 2020 and, despite Covid-19, we were able to achieve the graduation with only one month’s delay.”

In addition, he pointed out that ITPS’s flight test training programs are accredited and approved by the European Union Aviation Safety Agency (EASA), making the Canadian school one of only two civilian institutions in the world with this certification.

Flying in Canada was a new experience for Lo Greco and Rizzo, who arrived when winter had a firm grip on the Southwestern Ontario city of London. 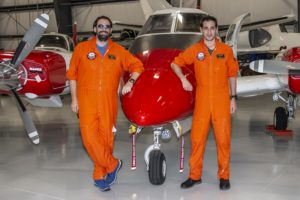 Lo Greco remembers one of his first flights with ITPS: “We were in flight during winter, in January, and of course we are looking for a visual reference to orientate ourselves in flight – but everything was white. I was scared. I thought: ‘I have to learn to test an aircraft and I’m not able to return home in these conditions!’ ”

Luckily, it didn’t take them long to acclimatize themselves, under the mentorship of the ITPS instructors, as they dove into their coursework. ITPS assigned them a dedicated classroom, part of the school’s newly-expanded facility that opened earlier this year. In total, the Italian students worked with 12 to 15 highly experienced ITPS instructors, all of whom imparted their own unique knowledge while still adhering to a standardized format.

“Different instructors told us different things, but in the same way,” explained Lo Greco. “Progression of the learning curve was optimized. I would say they gave us a very populated tool box, but they didn’t give us any solutions. They gave us the tools to build and find our own solutions.”

He added that one of the most important things in flight testing is maintaining safety, and at ITPS that is the primary concern of every instructor.

“All the flights were accurately briefed before the flight and debriefed after the flight. All the activities were properly planned and the flights were performed in areas with a very low population and always under the silent, but always vigilant, oversight of Toronto Air Traffic Control.”

Lo Greco and Rizzo said they were impressed by ITPS’s emphasis on the latest aeronautical technology. During their course, which finished on July 17, the two men flew in 10 different types of aircraft ranging from light single-engine platforms to business jets and fighters. They also trained in numerous flight simulators, some in-house and others accessed through an arrangement with CAE.

“We loved the jets, of course,” said Lo Greco and Rizzo. “The [Aero Vodochody] L-29 was our favourite. Sometimes, as pilots, we are able to feel the quality and the soul inside these pieces of aluminum that burn kerosene – we are able to feel that. The L-29 has a big soul. It will tell you its history; teach you a lot of things. It teaches you step by step, but if you make a mistake it also lets you know.”

“One of the highlights of the course,” continued Rizzo, “was the envelope expansion exercise with real-time telemetry monitoring and safety chase, utilizing two L-29s. Real-time data coming from the aircraft was visualized in the control room where a student, assisted by an instructor, was acting as Test Director with the responsibility to clear the test points for the envelope expansion. The chase played a fundamental role during the test and the student on board performed the visual inspection at every test point, reporting the status of the aircraft to the telemetry room. It was really interesting observing how three different players collaborated for the safety of the test.”

In addition to its own fleet of varied aircraft, ITPS has established a vast network of partnerships that allows students to experience many additional types.

Lo Greco tells a story to illustrate the power of that network.

“We jumped inside an aircraft and during the engine start-up we had a failure,” he recounted. “We could not start the engine due to a technical problem. We went to operations and said we had cancelled the flight. Within minutes, the ops manager came and said not to cancel it, because in 15 minutes we’d be able to fly the same aircraft from two hangars down. And in 15 minutes, we were seated in an identical aircraft, ready to go. This is what I mean about a wide web of relationships in order to find exactly what is required for the student.”

Simulation and technology play a critical role in flight test training, he added.

“You cannot obtain the learning curve without the synthetic environment. It can adapt to your learning times. You can stop, go back, try again. This is fundamental.”

“We had the opportunity to try out ITPS’s latest acquisition, the B787-based engineering simulator, a very impressive device with state-of-the-art avionics, which is going to prove invaluable for the training of the next test pilots and flight test engineers.”

The Training Must Go On

Just weeks into their program, the Covid-19 virus swept through Canada and the school was forced to shut down.

But Lo Greco and Rizzo never worried that their training plan would be derailed.

“ITPS had a quick and efficient response to the Covid emergency and they immediately rescheduled our overall plans,” said Lo Greco. “The main strategy was to proceed with all the theoretical lectures to limit the down time. They provided all the lectures online and we were surprised because they were very effective. The use of multimedia – mutual whiteboards and desktop sharing – made it very interactive. It was just like the classroom and sometimes even better.”

The students spent two months hunkered down in their comfortable quarters, waking up in the morning and often putting in 14-hour days.

“Trust me that we were busy all day,” said Lo Greco. “The time went very fast.”

Both were impressed with the speed of the school’s response to the pandemic.

During the Covid-related closure, the students were taught by several international instructors who provided virtual lessons synced with local London time.

As for the rest of the ITPS staff, the Italians said they will miss the school’s warm family environment. Before they returned home on July 18, the two shared some advice for other flight test professionals beginning a program at ITPS.

“Study a lot. They are very serious. It’s a very demanding course. You cannot survive without a good background because they push you into the maths, into the physics, and program management, so you need a good background. They give you a lot, but they want a lot in return.”

“The relationships that we were able to build with these instructors we will never forget,” concluded Lo Greco. “It is a friendship. They gave us more than knowledge. They gave us an attitude.” 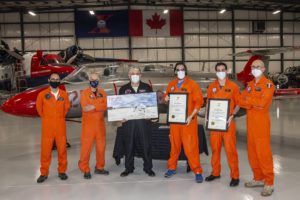