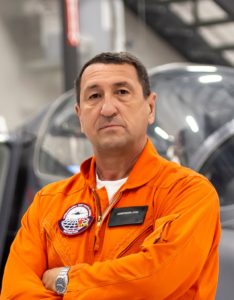 Constantin STAN has over twenty years FTE/Test Pilot experience in flight test and certification (Military, Part 23 & 25). He is a former Romanian Air Force (RoAF) fighter pilot with experience on Mig-23 and MiG-29 fighters. He is a graduate of the Polytechnic University in Bucharest with a degree in Aerospace Engineering (Structures). Whilst in the RoAF Constantin was employed at the Romanian Armaments Test Center, participating in development, planning and test execution of indigenous air-delivered weapons (bombs, missiles and aerial targets). He consulted on the MiG-21 Lancer upgrade program. Constantin was employed as Sr. Flight Test Engineering Specialist with MITSUBISHI REGIONAL JET where he participated in certification flight tests of the MRJ for JCAB and FAA. Previously Constantin was employed at BOMBARDIER AEROSPACE participating in the flight testing of the CSeries 100/300 as Sr. FTE Specialist during certification flights with Transport Canada and FAA. His Part 23 certification experience was gained at DIAMOND AIRCRAFT INDUSTRIES where he was employed as an Engineering Test Pilot/FTE during development of the D-Jet, five seats single engine (FJ-33) VLJ and undertook Flutter (MMO and VMO) flight testing, Performance & Flight Characteristics; Systems testing as well as DA-42L (multiengine), Lycoming STC flight tests including Flutter (VD), Performance & Flight Characteristics as well as Certification flights with TC and FAA. Other projects included the DA-40F, Spin certification (EASA) and DA 20 ASPEN and GARMIN Glass cockpit, testing and Certification (TC). Stan has flown over 2800 hours of which over 900 have been in experimental flight tests and holds Canadian and FAA ATPL licenses. He is a Member of the Society of Experimental Test Pilots.