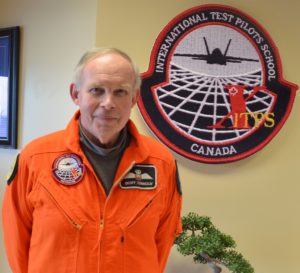 Geoff Connolly was an operational helicopter pilot in the Royal Air Force before becoming a flying instructor and then eventually going to the Empire Test Pilots School, graduating as a test pilot in 1986.Following several years as a military test pilot, Geoff joined an international helicopter company, working initially as an airplane and helicopter instructor teaching student commercial pilots. He then returned to an active test flying role, progressing to become the company’s Head of Flight Test. Geoff has more than 10,000 hours flying experience gained on over 60 types of helicopters and airplanes. He holds UK professional pilot’s licenses and training qualifications for helicopters and light aircraft. He is a CAA authorized Flight Examiner and Type Rating Examiner for Helicopters and an authorized Ground Examiner for the Private Pilot’s License (Helicopters). He is accredited to the UK CAA and MoD as a test pilot in connection with UK civil and military certification. These qualifications are also acceptable to non-UK authorities. Geoff is a ‘Pre-Selected’ expert advisor to the European Aviation Safety Agency, for matters relating to Certification, Airworthiness, Test Flying, Flight Operations and Training. Geoff is an elected Member of the Society of Experimental Test Pilots, a Fellow of the Royal Aeronautical Society, a Member of the British Association of Aviation Consultants, and an Upper Freeman of the Guild of Air Pilots and Navigators. Geoff previously served as a member of the UK Flight Safety Committee and of the UK Airprox. Board. He continues to serve on several committees, including the BHA/CAA On-Shore Liaison Committee and the BHA/CAA Small Helicopter Safety Group.