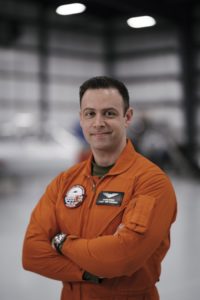 Dr Panos Vitsas has been involved in aerospace engineering research and academia for more than 15 years. He has a MEng in Mechanical Engineering and Aeronautics from University of Patras, an MSc in Human Factors and Safety Assessment in Aeronautics from Cranfield University with honoring awards, a PhD in Computational Aerodynamics from University of Patras and he is an ITPS FTE graduate of the FW flight test diploma course (Class 2012A).

Dr Vitsas has served as an A-7 Corsair engineer in the Hellenic Air Force and has participated as a researcher in European aerospace projects on aerodynamics. He has been a lecturer in aerodynamics and aircraft design and has provided freelance engineering services on UAV design, computational aerodynamics, and flight testing.

Since 2013 he works for International Test Pilots School as an FTE instructor on fixed-wing aircraft performance, flying qualities, digital FCS and pre-TPS academics and has participated in the flight testing of all ITPS acquired aircraft. He is the developer of the ITPS Engineering flight simulator, Helicopter simulator, and UAS GCS simulator. In addition to instruction he conducts research and has published over 15 papers in international journals and conferences including SFTE and SETP symposia.

Dr Vitsas holds a Transport Canada CPL with ME/IR for landplanes and seaplanes and a frozen EASA ATPL(A) having flown on the controls of more than 20 aircraft types. He is an Associate Fellow of AIAA and a member of the Flight Test Technical Committee. He is also a Senior Member of the Society of Flight Test Engineers and currently the European Chapter Vice President.