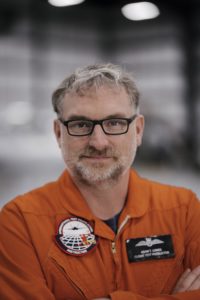 Adam Lowes has 17 years of flight test experience with the Canadian Forces and has recently retired from the Royal Canadian Air Force after 26 years of service. A 2004 graduate from the United States Test Pilot School and a proponent of life-long-learning, he holds a master’s degree in Electrical Engineering and a Graduate Diploma in Business. Adam has had the privilege of flying the venerable Sea King for eight years which included operational deployments spanning the globe. Adam was instrumental in the testing and conversion of the Sea King to ANVIS compatible lighting and during the past 17 years, he has conducted extensive evaluations on IR countermeasures and door guns including the Dillon M134, GAU-21 (M3M), and C-6 GPMG. He has also evaluated multiple EO/IR sensors and Helmet Mounted Displays. During his last four years in the Canadian Forces, Adam worked exclusively in developmental flight test on the CH148 Cyclone helicopter which included: performance, Handling Qualities, Fly-By-Wire/Flight Director mission mode development (Sonar Cable Angle Hold and Crew Hover), icing and avionics. He was the lead Canadian Forces test pilot for Shipboard Helicopter Operating Limits which culminated in five months at sea establishing the day, night and aided envelopes of the CH148 for the Halifax Class Frigate.