Alexandre is a Fixed Wing Test Pilot Instructor at ITPS. He was born in the Amazon region of Northern Brazil to a family of Italian descent. He joined the Brazilian military school aged 10 having his sights firmly on flying, inspired by his father, a 35,000-hour airline pilot.  He later became a fighter pilot for the Brazilian Air Force serving as an operational pilot for ten years. Looking for new challenges he applied for test pilot training and in 2007 he graduated as a Fixed Wing Test Pilot from the Brazilian Air Force Test Pilot School (EFEV). His experience spans over 3000 hours on more than 40 civil and military aircraft including the Mirage 3, Mirage 2000, Rafale, F-5EM, AMX, F-16D, AT-38, E-326 Xavante, KC-135, KC-390, KC-130, amongst others. Alexandre was fortunate to participate in the certification flights of EMB-390 (EMBRAER military multi-cargo mission), and the military version of EMB-550. He was the Chief Test Pilot of the High-Performance Fighter Acquisition Program (FX-2), which led to the purchase of the Saab JAS39 Gripen and he participated in the deployment and certification of air-to-air missiles (BVR, short-range IR and A-DARTER); as well as Anti-radiation missile developments. Alexandre also was involved in the Integration of avionics and navigation equipment; and the development of the AV-TM 300 Tactical Cruise Missile.  He qualified as a flight instructor on T-27 Tucano, E-314 Super Tucano, F-5EM, Aermacchi MB-326, E-110 Bandeirante, E-120 Brasilia, E-145 and Learjet 35A.

He later served as Lead Instructor of the Fixed Wing Test Pilot Course at EFEV, instructing in several disciplines including performance, flying qualities and systems flight testing. Alexandre later held the post of Commanding Officer of the Brazilian Aerospace Product Certification Division. Assigned to be the Head of the Brazilian Military Certification Agency, he had the opportunity to be part of the certification process of several military and space products for four years and flew some of them as a test pilot.

Alexandre graduated from the Brazilian Air Force Academy with a Post Graduate Diploma in Electronic Warfare (Technological Institute of Aeronautics – ITA), an MBA in Public Administration and an MBA in Strategic Management. Upon retiring from the Brazilian Air Force in January 2020 he had served for 30 years and accrued more than 3000 flight hours.

When asked about ITPS and Canada, Alexandre said “and here I am, from the north of South America to the north of North America to work for the improvement of safety in the aeronautical industry, helping other pilots and engineers to better understand and appreciate the beauty of gaining knowledge of flight.” 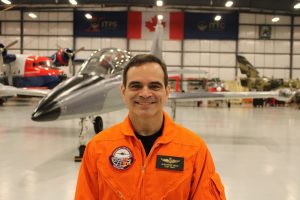