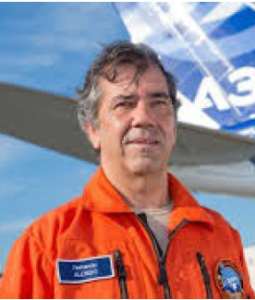 Fernando Alonso graduated as a Flight Test Engineer at the French Test Pilot School, EPNER in June 1990. he has over 5000 hour flight experience of which over 4000 reflect twenty-five years Large Commercial Aircraft and Military Transport Aircraft flight testing and certification.  Fernando was Lead Flight Test Engineer in First Flights of the following Airbus Aircraft: A340-200, A319, A318CFM, A380 and A350. He was also an instructor at the Airbus Flight Test School from 2002 to 2015. Fernando has been a presenter at EPNER, SFTE and SETP events. he earned a Master in Aeronautical Engineering (Madrid University), Executive Training at Harvard Business School. Head of flight and integration tests at Airbus Tolouse. Subsequent Head of Military division.