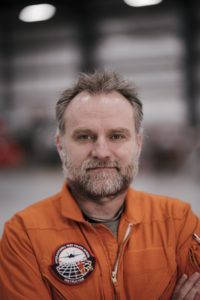 Cédric is a recently retired helicopter pilot from the French Air Force. During his 24 years in the military, he assumed several positions of responsibility such as Patrol Leader, Flight Commander and Squadron Chief of Operations and was employed in numerous missions in France and abroad: Search and rescue, Air Police, Combat against illegal gold mining and fishing, Ground Troops Support including Close Air Support and live firing with pintle-mounted or axial weapons He was graduated from the EPNER and joined the French Flight Test Centre as EC 725 program pilot and Electro- optic systems specialist. He oversaw the development and evaluation of multiple Electro-optic sensors (last generation NVG, FLIR, Obstacle Warning Systems, Helmet Mounted Displays…) and participated in the EC 725 Night Air to Air Refueling flight envelope expansion. He was responsible of the AS 555 Fennec and the AS 332 M1e Cougar renovation programs and has been part of most of the French force’s helicopters upgrade programs and acceptance flights. In the meantime, as Instructor then Chief Test Pilot Instructor, he has been in charge of all the different rotary wing test courses at the EPNER. He holds an Aeronautical Engineering degree from the French Air Force Academy, an EASA ATPL(H)-IR, he is Type Rating Instructor on AS 350 and EC 225/ AS332, and CAT -1 Flight Test Pilot and Flight Test Instructor. He has flown more than 4100 flight hours on nearly 40 types of fixed wing aircraft and helicopters, including 1400 flight test hours.